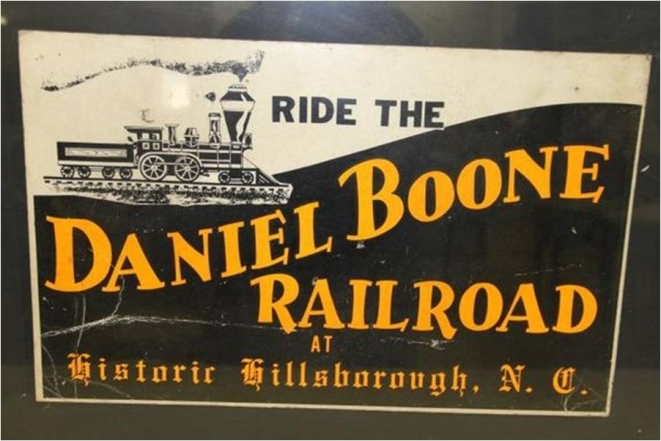 I did some digging through Google recently looking for some sign of the Daniel Boone Railroad. I was amazed to find a sign from the railroad on an auction site. I hope to get to Hillsborough for this auction and buy the sign.

Growing up obsessed with trains both of my grandfathers embraced my obsession and encouraged it effectively. Both took me on many, many train rides. As fate would have it, my Dad’s father lived in Hillsborough, NC. Located right off I-85 at the Hillsborough exit, the Daniel Boone Railroad used to exist within a giant park, not too different than Tweetsie in it’s heyday. Shops, restaurants, rides and from what I can remember, an amazing train ride that ran back into the woods and looped around back to the front of the park. Like Tweetsie, the ride included cowboys and indians jumping on to act out a train robbery and gun fight.

Connected with us on…

Tom Flanary from The Gold Coast Railway Museum was nice enough to share with me some new pictures of old #2. He sent me a link to it (HERE) with a photograph. The engine has been painted and is on display. Visit http://gcrm.org/! 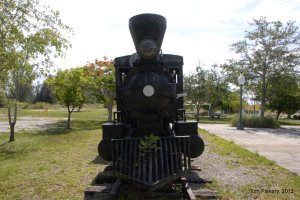 So, it seems The Daniel Boone Railroad and theme park in Hillsborough is fondly remembered by many. These posts continue to be some of the most popular. Recently, I received a note from someone we’ll call “Camo” and he shares the same memories I do. The difference: he’s been to what’s left of the park several times and sent me some pictures. I asked Camo if he’d write up a guest blog post and agreed. Enjoy!

Dear Tarheel Trains,
Growing up in NC in the late sixties and seventies offered many distinct advantages, especially if one were an only child. I was fortunate enough to be on the receiving end of hand me downs from older cousins. Often these cast offs were in the form of Western toys such as Johnny West. These toys were usually broken or incomplete, but I didn’t mind because I was thrilled just to have them!

To augment the toys of the time, Western theme parks were popular places of amusement.  Because of a near catastrophe my family experienced while leaving Beech Mountain (the brakes on my dads Oldsmobile overheated coming down the mountain, a runaway truck ramp saving our lives), those beautiful mountains and their attractions like Tweetsie became off limits due to the fear of a similar mishap occurring again. Fortunately for me, the historic town of Hillsborough was only a few safe miles away.

The Western theme park there was known then as “Daniel Boone Country”. Similar to Tweetsie, it offered a train, costumed cowboys and indians, rides and shows, all set in a Western pioneer village. I first visited there when I was approximately five years old and while I do remember visiting the park on more than one occasion, the details have been lost to time. However, I do remember riding the train and the smell of the black smoke. When Indians attacked along a wooded portion of the track, I became frightened, believing that the attack was real! One of the actors made up as an Indian sat down in the seat in front of my dad and I  and calmed my fears, reassuring me that it was all make believe for fun.

By all accounts, it was a magical place. By the time I had graduated high school, the park had sold their train (to Carowinds) and was on its way to becoming defunct. Last summer my wife and I invited my father to join us on our vacation to visit the USS North Carolina in Wilmington. On the way home, my father spotted the exit sign for Hillsborough and asked if I remembered going there as a kid. Of course I did, so we agreed to go back there together. We made that trip a couple of weeks ago.

Very few traces remain of the old park. There are two cabooses being used as rental space for antique shops, and an old passenger car complete with graffiti that sits on a small slice of track under a lean-to. A lot of the old Western style store fronts remain, their weathered paint and abandoned appearance creating the atmosphere of a ghost town. The old Blacksmith shop still stands, complete with hand painted lettering, even though it now serves as a junk shed. Beside the “Antique Mall”, is a storage area where one can find wagons and antique farm equipment rotting in the open. A few feet up the hill stands a dilapidated barn that contains the Daniel Boone stage coach.

Another barn on the premises houses more wagons, antique trucks complete with bullet holes and hand painted signs (by Apache Joe?).  At least Daniel, a twenty foot tall “muffler man” type figure still stands.  A similar Indian figure that once adorned the roof of the steakhouse across the street has vanished. If one cares to look, one can still find traces of the park in the form of waterwheels (pan for gold attractions?), a miniature covered bridge and a weather vane (part of the old train depot?), but these sights are disappearing daily. An old kiddies’ ride that I saw on a earlier visit, rotting away amongst some weeds, had been cleared away when I returned with my camera (see link for pics).  I just got the feeling that whoever owns the park may now be clearing out some of the old left over’s because the gates to the barns were open and the area where that kiddie ride had been was open after previously being cordoned off.

I did make a brief attempt to find old track, but that area is now a trailer park, and I did not want to arouse the suspicion of any tenants by poking around in their backyards. I would urge anyone interested in seeing what is left of the park to make the trip post haste. In these economic times, who knows what the current owner may have in mind for the property. Being an amateur singer/songwriter, my visit inspired me to write a new song about the old park. As soon as it is finished, I will post a link. Thank you all for your interest.
Sincerely,
-Camo 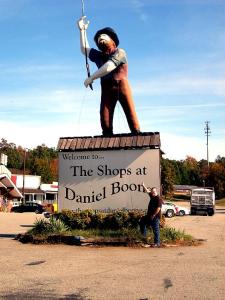 The posts I’ve written about the late Daniel Boone Railroad in Hillsborough are some of the most viewed on the site.

Recently, I received an email from a guy we’ll call “Camo” who has fond memories of riding the train, as I do. He has volunteered to take some new pictures of the area, as well as share some of his old pictures of the RR.

I asked, and soon we’ll have a special guest blog post coming soon from our friend, “Camo.”

Here’s a teaser photo for you. Camo in Hillsborough, in front of old Daniel himself.

Check back soon. More to come…

In my quest to locate the train or locomotive I used to ride as a small boy with my grandfather in Hillsborough, NC I have been able to locate many pictures and much info regarding the old engine and cars.  The story started when I posted a story and photo of me in front of the train on this forum on January 3rd something interesting happened. Click HERE for the initial post. 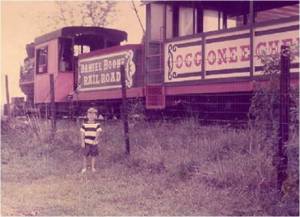 A gentleman from the Pacific Coast Railroad Company in California posted a comment about the engine known as “Melodia.” Come to find out, his company has the engine and operates it. I was thrilled. I had found the locomotive. I posted a follow-up story from my initial post exclaiming how excited I was to find the engine. Click HERE for the second post.

A THIRD POST was written detailing the whereabouts of one of the old engines that used to operate on the Daniel Boone RR. It sits in Florida…sadly, rotting away.

Imagine my excitement when a reader emailed me an mp3 of the actual Daniel Boone Railroad theme song. Obviously, he captured it from vinyl. I thought it would be fun to take the tune and some pictures and create a YouTube video to share. I sprinkled in a couple of other pictures to keep in interesting. Hope you enjoy it.

All we’ll ever have are memories. I would love to get any photos you may have of the old train, station or railroad line. Please email them to tarheeltrains at gmail dot com.